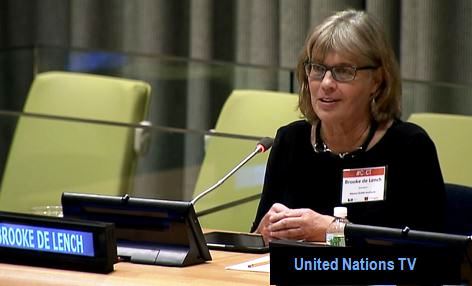 Brooke de Lench is the Founding Executive Director of the 501(c)(3) non-profit, MomsTEAM Institute, Inc. and Founder and Publisher of MomsTeam.com,® now in its 17th year as the most trusted resource for all sports stakeholders of comprehensive, well-researched, objective information on a wide array of youth sports health, safety, nutrition, and sports parenting topics.

Recognized as a visionary thought leader in youth sports safety and a pioneer in concussion education, Ms. de Lench is Producer/Creator of the critically acclaimed documentary, The Smartest Team: Making High School Football Safer, which has been airing on PBS stations across the country since 2013, and author of Home Team Advantage: The Critical Role of Mothers in Youth Sports (Harper Collins).

An active journalist/blogger for MomsTEAM, Ms. de Lench is a sought-after lecturer, keynote speaker, and symposium panelist on a wide range of youth sports safety topics. Included among her recent appearances have been as a panelist at the Coalition for Concussion Treatment (#C4CT) Concussion Awareness Summit during Super Bowl XLVIII at the United Nations in New York City, a recent Aspen Institute roundtable on "Playing Safety: The Future of Youth Football," and the national symposium on preventing sexual abuse in youth sports organized by the National Center for Missing and Exploited Children in Washington, D.C., and as a speaker at the University of Maryland Francis Carey Law School on "The State of Concussions," a wide-ranging symposium on how to protect athletes through advances in law, public health, and medicine.  In March 2017, Ms. de Lench will be speaking at a workshop on reducing the risk of concussions in youth athletes at the International Olympic Committee's World Conference on Prevention of Injury and Illness in Sport in Monaco, and has been invited to speak to the World Congress of Brain Injury in nbsp;New Orleans, LA running from March 29 to April 1, 2017.

The founder of the “Teams of Angels”, a MomsTEAM Foundation established in 2002 at the request of twenty families whose child had suffered a catastrophic sports injury or who died as the result of a sports accident or of an undetected ailment, she and the MomsTEAM staff now work with over 300 such families to provide support, resources and ongoing information.

A regular participant at the annual NFL-USA Football Health and Safety roundtable, Ms. de Lench has consulted with the NFL/USA Football on how to make youth/ high school football safer, and consults with schools, sports leagues and many other national sports organizations on policy development and strategies for making sports programs safer, less stressful, and more inclusive.

Ms. de Lench is veteran of more than 300 live television appearances, has appeared on all the major television networks, and is quoted frequently in the print press. Her opinion pieces have appeared on the op-ed pages of major newspapers nationwide and she will be featured in a number of upcoming Canadian, British and American television shows on her work as a youth sports expert and film producer.

The mother of triplet sons, Ms. de Lench is a native New Englander and lives in the Boston area.